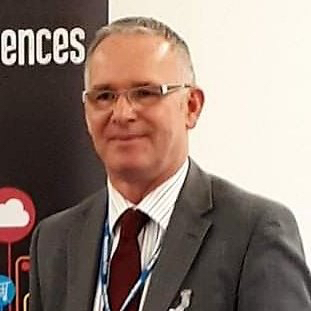 IASME has grown three-fold just this year alone, and in January we welcomed Paul Crumpton to the team. He joins us from a 30+ year career with the police to carve out a new role within IASME. We asked Paul to introduce himself and explain what being a ‘relationship manager’ is all about.

Welcome Paul, can you fill us in with some of your story so far? Having left school with little to no formal qualifications, and with an interest in mechanical engineering, I started my working life as a car mechanic. I loved taking things to pieces, repairing and putting them back together (hoping they would work!)
I also really enjoyed helping people and it was a family friend who encouraged me to consider what became a long and rewarding career in the police. I was 22 and since school, the most I had written until that point, was contained in an MoT report. To my shock, after three interviews and other processes, I was accepted into the police, where I started my new career stationed at Evesham.

My interest in ‘gadgets’ remained, and I transferred that to crime prevention and specifically to how technology can reduce a crime risk profile.

Over time, I was promoted to Sergeant and became responsible for Evesham police station and held a number of roles before finally being promoted to Inspector. During this time, I was the Control room Inspector, managing incidents across the force area, firearms commander and a number of other functions.

Following a posting to Herefordshire, I completed my policing career, or so I thought at the time. However, after about two weeks away, I missed the structure, and the elements of helping others and protecting people, so I went back.My new role was as a crime prevention advisor to the business community. I had a long held interest in the internet and wifi enabled security devices, and became a ‘go to’ person for cyber related enquiries within the police. This brings me neatly to the connection to IASME, as it was while I was presenting at one of the many expos that I met Chris Pinder ( IASME COO) Duncan Sutcliffe (Insurance broker to IASME) and Emma (IASME CEO) and we saw each other on a regular basis as we kept pitching up at the same events.

4-5 years passed by and then at the end of 2020 my 35 year career in policing concluded and I joined IASME in January of this year.

What exactly does your new job at IASME involve?
My role was created because the company has expanded exponentially and there is a need to have a proactive relationship with trusted partners. For my role, trusted partners would mainly include those organisations that organisations turn to for trusted advice and would include the likes of trade bodies, police, banks etc.  In order to give better value to these partners, IASME wished to expand the opportunities to build solid, ongoing and mutually beneficial relationships. In addition to the new managers of our IoT Security Assured scheme and our Counter Fraud Fundamentals scheme, I am here to inform and raise awareness of all our schemes and products, and to be a listening ear to organisations who might not understand some of the gobbledegook.

I like to come to the conversation with, what’s in it for you? I’ll talk about why an organisation might want to consider their cybersecurity posture and their fraud posture, but not through raising the fear of crime. I focus on the benefits to businesses, for example, improving reputation and demonstrating to prospective customers that you’re a safe organisation to do business with.

How are you finding it at IASME and how do you anticipate the role evolving?IASME is a very genuine company, its forward thinking and it’s got a quirkiness to it. I like quirky, it is safe to have ideas and you feel trusted to evolve and develop your own role. I believe IASME when they say they’re interested in your welfare, we work in a very integrated diverse team and it’s refreshing.

IASME is first and foremost a cyber security certification organisation. We need to ensure that we consolidate and give due diligence to our existing clients and take them forward with any changes that the evolving schemes identify. We also need to introduce those that are not already on the pathway, to their own cyber security journey. However, if I speculate about the way forward, I certainly think as well as consolidation, there will be opportunities for further collaboration.